Change of ownership at Electrovac 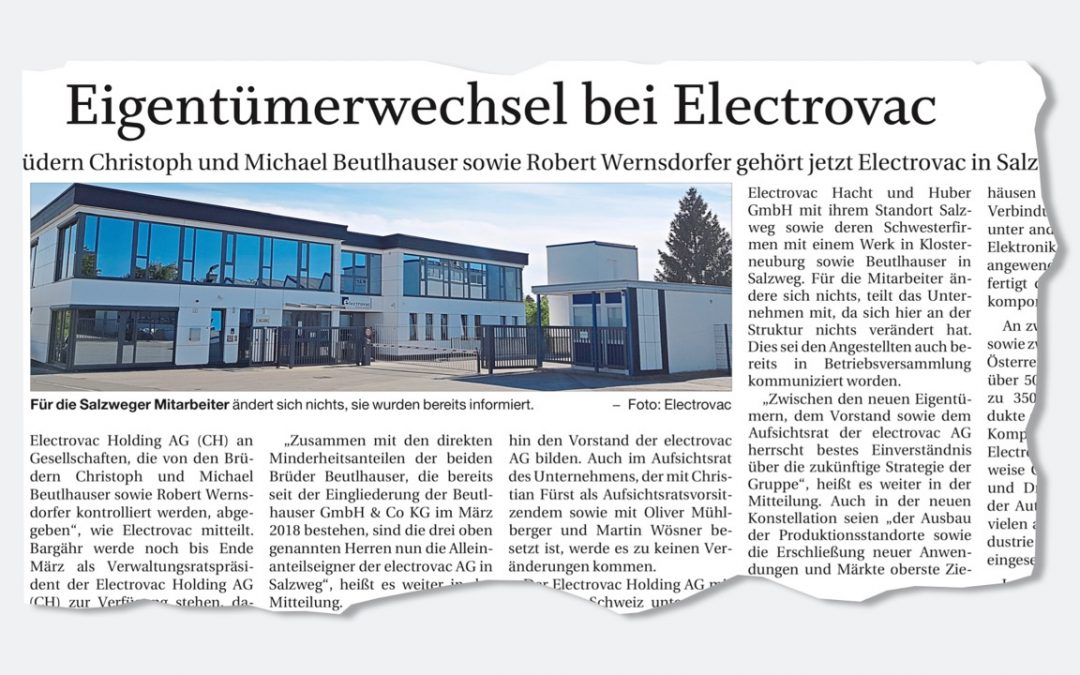 Almost a year ago, Electrovac acquired Beutlhauser GmbH & Co. KG and founded electrovac AG, based in Salzweg (PNP reported). Now it is time for a change of ownership at Electrovac Holding AG: The brothers Christoph and Michael Beutlhauser as well as Robert Wernsdorfer now own Electrovac in Salzweg.

The affected employees have already been informed about this in a company meeting, nothing changes for them. The trigger for the change is a change of ownership at Electrovac Holding AG, based in Switzerland. In 2010, she took over the company Electrovac with her boss Christian Bargähr as “BC-Tech Holding” and was renamed as part of the restructuring last year. Bargähr recently placed “100 percent of its shares in Electrovac Holding AG (CH) in companies controlled by the brothers Christoph and Michael Beutlhauser and Robert Wernsdorfer,” Electrovac said.

Bargähr will still be available as Chairman of the Board of Electrovac Holding AG (CH) until the end of March. “Together with the direct minority shares of the two brothers Beutlhauser, which has been in existence since the incorporation of Beutlhauser GmbH & Co KG in March 2018, the three gentlemen mentioned above are now the sole shareholders of the company electrovac AG in Salzweg, “it says further in the message.Dieter Thumfart and Rainer Matzka will continue to form the board of electrovac AG. There will also be no changes in the Supervisory Board of the company, which is staffed by Christian Fürst as Chairman of the Supervisory Board, as well as Oliver Mühlberger and Martin Wösner.

Electrovac Holding AG, which has its registered office in Switzerland, will be subordinate to electrovac AG, which is based in Salzweg and the latter Electrovac Hacht and Huber GmbH with their location Salzweg and their sister companies with a plant in Klosterneuburg and Beutlhauser in Salzweg. Nothing changes for the employees, informs the company, because nothing has changed in the structure. This has already been communicated to the employees in a staff meeting.

“The new owners, the Management Board and the Supervisory Board of electrovac AG have the best possible agreement on the future strategy of the Group,” the statement said. Also in the new constellation are “the expansion of the production locations as well as the development of new applications and markets the highest goals”. The Electrovac group is one of the leading developers and manufacturers of hermetic enclosures by means of the “glass-metal connection technology”, which among other things Electronics, sensors and actuators are applied.

Beutlhauser manufactures the necessary metal components. At two locations in Salzweg and two further locations in Austria and Thailand, more than 500 employees produce up to 350 million quality products per year as well as the required components. The products of the Electrovac Group, such as housings for airbag igniter and pressure sensors, are used in the automotive industry and in many other areas such as industry or aerospace. In the last fiscal year, the group generated a turnover of about 75 million euros, the company said .